God’s Word teaches that God’s “divine power has given us all things that pertain to life and godliness through the knowledge of Him who called us to glory and virtue” (2 Peter 1:3). Human government is a necessary part of life. Jesus Himself taught, “Render therefore to Caesar the things that are Caesar’s, and to God the things that are God’s” (Matt. 22:21). That certainly does not give government unbridled authority.

The Manhattan Declaration, a document signed by numerous evangelical and Catholic leaders focusing on three issues essential to national well-being, the sanctity of life, sanctity of marriage, and religious freedom states this principle well. The Declaration concludes, “We will fully and ungrudgingly render to Caesar what is Caesar’s. But under no circumstances will we render to Caesar what is God’s.”[1]

Therefore, it is important for us as believers to know what God’s Word says about government, particularly when we have the opportunity to actively participate in it as we do here in the United States.

Allow me to share just a few thoughts. The current presidential campaigns along with other offices and a graduate course I am teaching on American Framework for Free Enterprise focusing on free enterprise, constitutional republic, federalism, the rule of law, and Judeo-Christian values have this issue fresh in mind.

Government must have limitations. If not, government will run away with power. History attests to this fact.

British historian Lord Acton has said, ““Power tends to corrupt and absolute power corrupts absolutely.” New York Times editorialist, David Brooks has cited G.K. Chesterton’s statement that original sin “is the only part of Christian theology that can be proved.” Since government, of necessity, is made up of men and women such as we are, prone to sin, government must be bound lest it run away with power.

Thomas Jefferson, principal drafter of the Declaration of Independence and third president of the United States understood that reality. He wrote, “In questions of power, then, let no more be heard of confidence in man, but bind him down from mischief by the chains of the Constitution.”

James Madison, known as the Father of the Constitution and fourth president of the United States concurred: 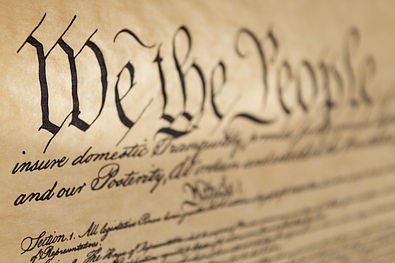 1) The Manhattan Declaration can be found at manhattandeclaration.org

Thus our founders wisely guided government in principle through the Declaration of Independence and gave structure to carrying out those principles in the U.S. Constitution, a document that both enabled and constrained the national government. Constrained, as Jefferson wrote, “by the chains of the Constitution.”

Thus, by design, our national government, by the terms of the Constitution including its amendments, is enabled to carry out certain enumerated powers and constrained from going beyond. The Tenth Amendment reads, “The powers not delegated to the United States by the Constitution, nor prohibited by it to the States, are reserved to the States respectively, or to the people.”

As we as Christians participate in our governmental processes including, but not limited to, our right to vote, we would be wise to remember the reasons for limiting government lest we find ourselves bound unlawfully by the very entity that itself was to be bound by the chains authorized by “we the people” in the Constitution.