This article is a re-publication from the Wharton Spectator- Journal originally published March 12, 2008.

It couldn’t be the Irish from a “land so marginal that the Romans had not bothered to conquer it, by men so strange they lived in little huts on rocky outcrops and shaved half their heads and tortured themselves with fasts and chills and nettle baths.” 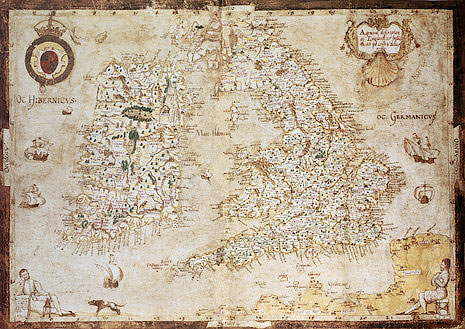 But, indeed, according to author Thomas Cahill, it was the Irish who saved Western Civilization. How could that be? Do we really owe them such a debt? Presumably most Americans know of the ancient Roman Empire and many of the historical and cultural roots of that empire that spread and influenced even our country over a thousand years later. Hopefully most know not only of its grandeur but of its moral, cultural and social decay that ultimately led to its fall, officially recorded as taking place in AD 476.

Having decayed from within the Empire, Roman culture and its recorded history fell prey to barbarian invasions that pillaged not only the farms and cities but laid waste to the pillars of civilization – the books and libraries containing records not only of Roman but Greek and Judeo-Christian civilizations as well.

Were it not for the providential activity of a British monk who evangelized the land where he had been a slave, Cahill contends that “our own world would never have come to be.”

His book How the Irish Saved Civilization: The Untold Story of Ireland’s Heroic Role from the Fall of Rome to the Rise of Medieval Europe documents that thesis.

That British monk was, of course, St. Patrick, the subject of last week’s column.

This upcoming week, as you celebrate the holiday, a tip of the hat to St. Pat, the Irish converts to Christianity and the God who inspired them would certainly be in order.

In mid-life after having formerly been a slave in Ireland in his youth, Patrick returned about age 40 to the Emerald Isle to share the message and love of Christ. Along with the gospel and spiritual salvation, Patrick inspired a zeal for learning. According to Cahill, within one generation an illiterate pagan people not only learned to read but began speaking in multiple languages including Latin, Greek and sometimes Hebrew! To satiate their newfound cultural appetite they fastidiously copied books – books that had been brought by refugees from the European continent fleeing to the fringes of the empire from the barbarians who sacked their homes, cities and lands.

After Patrick’s death, Irish followers began to take that same gospel out beyond their borders, first to Scotland, then ultimately back to the European continent.

Where they went they took their books and knowledge of Western civilization with them and replanted what otherwise would have been permanently lost. Cahill states, “Ireland, a little island at the edge of Europe that has known neither Renaissance nor Enlightenment – in some ways, a Third World country with, as John Betjeman claimed, a Stone Age culture – had one moment of unblemished glory.”

As Irish scribes copied, “everything they could lay their hands on … they served as conduits through which the Greco- Roman and Judeo-Christian culture were transmitted to the tribes of Europe, newly settled amid the rubble and ruined vineyard of the civilization they had overwhelmed.”

Cahill claims it was the missionary minded Irish monks who “single-handedly refounded European civilization throughout the continent” such that without them, “the world that came after them would have been an entirely different one – a world without books. And our own world would never have come to be.”